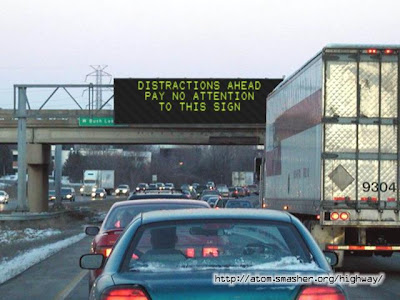 While the city fathers (and mothers and single gay men) are cracking down by ticketing drivers who talk on cell phones, the Washington D.C. Department of Transportation has erected 43 billboards to remind motorists that “Distracted Drivers Kill!” Needless to say, if the billboards have an effect, the effect will be to – you got it! – distract the driver!

The other morning, the Today Show did a “story” about how those who share a bed can solve certain sleep problems – like when one partner grabs the covers off the other partner.

What passes for news these days is worse than piffle; it is often the result of public relations people bamboozling producers and editors on behalf of hidden nefarious interests. Starting in early March, you will see or hear news about how 70 million Americans have sleep disorders as part of an awareness campaign by the National Sleep Foundation.

Look, we all have occasional difficult falling into the arms of Morpheus. But one-

third of all adults do not have any medical issue with sleep as the Foundation claims. And “restless leg syndrome," which you may have heard of on TV, is not a real medical condition.

Now, does it surprise you to know the benign-sounding National Sleep Foundation, and all the news media that it supplies, is a creation of the mattress and pharmaceutical industries, and that there was no national scare campaign about sleep disorders until Ambien, Lunesta and Sonata were marketed – to the tune of 35 million prescriptions and $2.1 billion in 2005? Or that the National Institutes of Health says psychotherapy is just as good at dealing with insomnia as are pills?

I Lost It at the Movies

I woke up to the ways of the business world as a young man when a friend who worked for a local movie chain (gone the way of the public phone booth) advised that theater owners lose money on the movie but make it up in popcorn sales.

A visit to the concession stand at any theater these days costs more than the admission price – especially if you use your credit card at a lobby ticket-dispensing kiosk and buy “senior” tickets. (This only works if you are within 20 years of looking as if a teen age ticket-taker will never question you.)

I wish someone with a business degree – okay, someone who once read a marketing newsletter – could tell me the point of pricing a medium bag of popcorn or a soda at, say, $4.75 and a large one at $5.25 “with free refills.” Is it because people are stupid enough to think there is 10 percent more product or that they could even finish that amount of popcorn or soda at a 90-minute movie?

Never mind. I get it now.

And whatever happened to being able to leave your popcorn, soda and Gummi Bears on the floor for an usher to pick up. Oh, you ask, what’s an usher? Might as well ask what’s a projectionist? Or what’s a decent movie anymore.

What did bring us to the movies was “Venus,” the vehicle by which Peter O’Toole will finally lose his Oscar virginity.

A tour de force of acting by someone to whom it comes naturally. It has visually affecting scenes of the city of London and its people, but it would up much less than I had expected after reading almost unanimous rave reviews.

I am sure Brits will like it, for sure, as the movie celebrates the legion of fine thespians they have given the world, and I suspect there is some “regional” humor that passed over my head, especially having to do with accents. So, one question for readers across the pond: What’s with the grammatical construction “it were” instead of “it was?” Chaucerian? Shakespearian? Scousian?
Posted by Ira