Almost four years ago, the chicken hawks in the Pentagon fired a general for speaking the truth that it would takes several hundred thousand troops to pacify Iraq. How times have changed!

This week, troops are in open political and medical revolt against the president and getting away with it.

USA Today reports that a Navy commander is speaking publicly about "a perfect storm" rising where there aren't enough mental health experts in the military to deal with Marines coming home with their body parts intact but their psyches cracked by post-traumatic stress syndrome – fittingly the subject of the current Doonesbury comic strip arc. 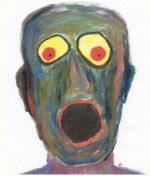 At the same time, more than 1,100 active-duty soldiers and Marines (as this is posted) have signed an on-line petitiondemanding a quick withdrawal from Iraq. They are within their rights, and if the chicken-hawk-in-chief makes any move against them, expect a great deal of unpleasantness in the streets in Washington as well as in Baghdad.

This war has produced a far higher percentage of PTSD than Gulf War I, Vietnam and Korea, and long after a settlement is reached in Iraq, these M.E.Ds (mental explosive devices) will be going off throughout America, thanks to the very few people in the Pentagon and White House for whom one mental health specialist would have been enough.
Posted by Ira