It is becoming a little clearer to me and others that the turnover of Congress to the Democrats was only partly due to an insane and unpopular war. Every large economic indicator points to a thrumming prosperous economy, but do you know anyone who is sharing in it?

Republican always used to sneer that Democratic social programs simply amounted to "class warfare." Well, as billionaire Warren Buffet put, "If this is class war, my side is clearly winning it." 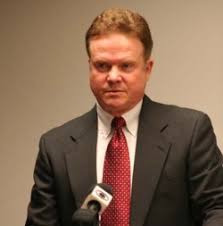 And that is what Sen.-elect Jim Webb of Virginia writes about in the Wall Street Journal.

The politics of the Karl Rove era were designed to distract and divide the very people who would ordinarily be rebelling against the deterioration of their way of life. Working Americans have been repeatedly seduced at the polls by emotional issues such as the predictable mantra of "God, guns, gays, abortion and the flag" while their way of life shifted ineluctably beneath their feet. But this election cycle showed an electorate that intends to hold government leaders accountable for allowing every American a fair opportunity to succeed.

The rest of it is worth a read.
Posted by Ira