What better organization than the American Heart Association to promote waltzing.

The nation's top cardiologists have been meeting in Chicago producing knowledge - and press releases, some actually important.

Rather than discuss "strategies for reducing door-to-balloon times in acute myocardial infarction," a title that of course speaks for itself, let's review the study that says for older patients recovering from heart failure, waltzing is more beneficial than marching on a treadmill or pumping on a bicycle.

What a lovely piece of science. But there are caveats.

First of all, the three-step study - measuring outcomes for those who did traditional cardiovascular exercise, those who danced, and those who sat around - included only 110 people. Second of all, the benefit may be of limited value because few people know what a waltz is anymore. And third, the health advantage may well be 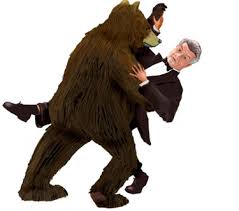 due to a long-known biobehavioral effect of recovery - if you have social contacts, you do better.

Since there were far more men in the study than women, we are not quite sure how much the social satisfaction of dancing played a part, but it probably beat waltzing with bears.
Posted by Ira